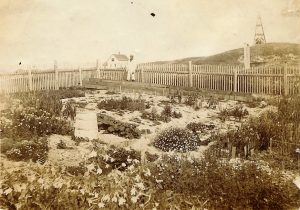 Hello, this is Shania, your Archives Story Teller, and this time we are going to discuss the story of the food eaten by the people of Sable Island.

From historical documents it is known that the people of the island made attempts at growing many different kinds of crops, some more successful than others.

Of these, none is mentioned more often than potatoes, which appear to have been a staple food for the islanders.  There are multiple mentions of potatoes being sent from the mainland to be used as seed for Sable’s gardens, and much discussion of how the potato crop is faring from one year to the next.

Some years potatoes grew plentiful, if not as large as their growers might have liked.

“I have not found any method in a variety of experiments to enlarge the growth of potatoes on the Island they continue in general size of walnuts but are verry good eating and have had plenty for both family, for table or seed”

Other years, half of the crop would be killed by the weather.

“Potatoes are just beginning to grow and look well some of them, others have never come up but the seed Rotted in the Ground, although Planted Twice over, on account of the very Cold Weather”

Despite these setbacks however, potatoes were plentiful enough that it is stated that even a man on limited rations might have as many potatoes as he likes

“From this period the Superintendent treated Nichols as a person guilty of insubordination and put him under the allowance considered proper under the Island regulations – as a Castaway or Ill person the Superintendent consulted with Henry Marsh as to the most suitable diet for a person whose condition and ordered Marsh to give him a pound of bread or bread stuffs and a pound of beef per day: with as much potatoes and fish as he chose to make use of of which there was abundance within his reach”

This  shows that they were not hurting for any of this particular vegetable.

Joining the potatoes in the garden were also a wide variety of grains, including barley, wheat, and oats.  It can be supposed that the oats likely fared well, as oatmeal is mentioned as a usual part of the hired men’s diets on the island.  Bread and bread stuffs are also mentioned to be staples of the islanders’ diets and it is stated that a large amount of bread was baked on the island per day, as much as 90 pounds per day.

Among the other crops grown were “Indian” corn (today more commonly referred to as Flint corn), turnips, radishes, cabbage, beans, red beets, meal, cucumbers, onions, carrots, and salad.  While theoretically this should have meant the island was always well stocked with produce, it was most definitely not so easy.  Sable Island is largely sand, and is prone to very strong winds and frequent storms.  Growing anything on the island meant the soil had to be prepared with manure and other fertilizers to make it suitable for planting, which would not have been a quick process.  It also meant shielding the plants from the wind as much as possible to avoid them dying before they could properly grow.

This is not to say that their gardens were failures or that crops could not grow well on the island – indeed, if one were to visit the island today one would still find patches of fertile earth left from when the island was still home to communities which show just how well they cared for their gardens.  What it does mean however was that keeping a productive garden on the island would not have been easy, and the loss of crops due to weather or pests was simply an expected peril of living on Sable Island.

Cranberries also grew wildly on the island, well enough that cranberries are mentioned several times in the context of exporting items to Halifax.

Among the crops grown on the island, not all of them were intended for human consumption.  English grass and Dutch grass were grown on the island for the purposes of making hay for the various livestock that lived on the island.  The production and harvesting of hay were a frequent concern; the amount that would need to be grown to sustain the animals through the winter is discussed in letters.

“It is a very backward season here, I’m afraid I will have some Difficulty in Growing Hay for our Stock which is encreasing fast”

and the various dramas surrounding the harvesting and storing of the hay are well documented.

Speaking of animals, there were many that were kept on the island for the purpose of feeding the people who lived there.  Among the livestock were dairy and meat cows, pigs, sheep, goats, and horses.  While there are no mentions of poultry in earlier accounts, later writings mention keeping fowl on the island, including a hen’s house, meaning that they almost certainly had access to eggs and poultry meat.  Beef is mentioned as being eaten multiple times in the documents, with there even being enough at times to send some to Halifax.

“and am sorry we have nothing to send you in return but some barrels of Cranberries, & two barrels of Corn’d Beeff”

Milk and butter were also present, though just how much made its way to the workers is fiercely debated in the documents.  Pork is not mentioned often, but as pigs were kept it is almost a certainty that pork would have been eaten. It is mentioned in a very early letter from before the first establishment on Sable that goats on the island would be useful for both their milk and their meat, so it can be assumed that that was indeed what they were used for.  The many wild horses of Sable Island are among the most famous aspects of the island, and so it is unsurprising that the people of the establishment would endeavour to make use of them in some way.  On a few occasions horse meat is mentioned, which suggests that they were at some point hunted for food.

More commonly however, they are described as working animals that pull the carts that carried hay and salvaged goods around the island.  They were also shipped off the island to be sold on the mainland, as is discussed on multiple occasions.

“I also send you four young Horses, not exceeding three years old, Two of them has been Rode on, and they have all been Cutt, and are well, the anger over with them”

Fishing and hunting were also practiced to supplement the diets of the islanders, though the island’s often violent weather could make such practices difficult and dangerous.  There was also no guarantee of success – one letter describes the island as having the fewest birds the writer had ever seen in a coastal region, while also lamenting how few birds the hunters have managed to catch despite several trips.

It was not all disaster however: fisheries had a significant presence on the island, enough so that the commissioners frequently ask after how the fishery is faring in their letters to those living on and visiting the island.  Fish such as herring, cod, and mackerel are mentioned on several occasions, with mackerel being ubiquitous enough that even a man on a restricted diet might have as much as he liked.  Rabbits also inhabited the island and were hunted for both their meat and their skins; seals were hunted in a similar manner, with their skins and oil being an export of the establishment.

Not everything could be grown or provided on the island however – there were certain things that just would not grow or be processed on such an ill-weathered, isolated location.  For these things, the islanders received provisions from the Commissioners and the government, as well as sometimes buying extra small luxuries for themselves.  Among these off-island foodstuffs were tea, mustard, pepper, liquor, sugar, smoked salmon, molasses, and seeds for the gardens.

Despite the apparent windswept desolation of Sable Island, for many years it provided what was necessary for people to live on its shores.  What its people ate was influenced as much by what the island had to offer as their own preferences, and that story lives on in the garden plots and fenced paddocks archaeologists have found evidence for near the East Light Station, which remain even now.

Thank you for reading, and I hoped you enjoyed the story! I’ll be back soon with some more Sable Island history.